Continues from Valentine’s Day Party on a Budget | Part 1.

Now for the treats. I served cupcakes, cake, marshmallow pops, cupcakes in a jar (for favors) and jars of milk to wash all of the sweets down. 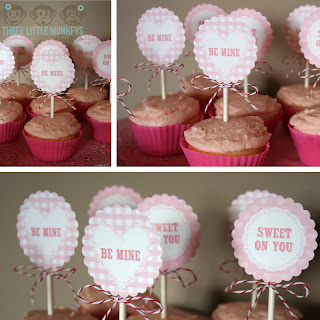 To make my cake, I used a small 5″ cake pan that I use when I make smash cakes for my children. If you don’t have a cake pan that small, Wal-Mart does carry a 6″ pan in the Wilton aisle in the hobby area for $6. I made my two cake mixes and baked 2 layers of the white in the pan, and one layer of the strawberry cake mix. I also baked a dozen cupcakes in silcone liners from the Dollar Tree store, and I baked the remaining strawberry cake batter in a sheet cake pan. You could just do a two-layer cake using an 8″ pan too. I just have a thing for miniature things. Could be because I’m barely 5′. It’s all about perspective. 😉 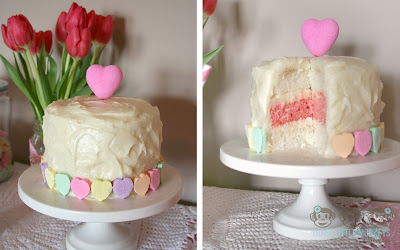 To assemble my cake, I put buttercream between each layer, crumb coated my cake (or dirty iced it if you watch Cake Boss like my five year old) and stuck it in the freezer while I iced my cupcakes. Once out of the freezer, I added more icing and decorated it with conversation hearts and a puffy heart I picked up from the dollar store. Please don’t judge my cake decorating skills.

Cupcakes in a Jar

To make my cupcakes in a jar, I used mason jars. If you don’t have those around the house, you can pick up a dozen jars from Wal-Mart in their canning section for $10 or save some condiment jars. It would be so cute for that shabby chic look! 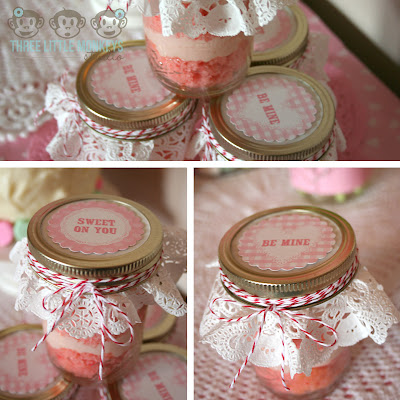 I took my sheet cake and cut out 2″ rounds using a biscuit cutter and pushed one into each of my six jars. Then I topped them with some marshmallow icing, another layer of cake and another layer of icing. I put a lid on each jar, centered a paper doily over the jar, then I screwed on each ring. I wrapped them with a little baker’s twine and taped a party circle on top (get your {FREE} party circles here). I love how they turned out. Such a pretty vintage feel!

The marshmallow pops were so easy to make! I used one bag of pink and white heart-shaped marshmallows and pink candy melts to make one dozen pops. I poured half a bag of pink candy melts (available from the Wilton section at Wal-Mart) into a bowl and slowly melted them in the microwave. I nuked them in 20-second intervals, stirring between each round. Once the melts were ready, I stuck a lollipop stick in a marshmallow, dipped them in the candy coating, gently tapped them to remove the excess, and placed them on a piece of wax paper to set. Since I had some pink sugar in the pantry, I sprinkled a little on top. 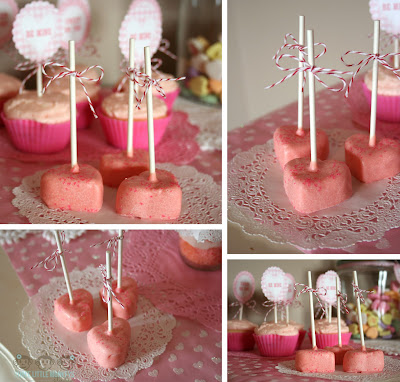 Putting It All Together

Now for the assembly! I used my cake stand, but if you don’t have a cake stand, you can easily make one out of a soup can covered in some of your leftover wrapping paper with a plate centered on top.

To display the rest of the food items, I used leftover paper doilies from the banner rather than serving dishes, and they worked perfectly. And even better: easy clean up!

I used a large glass jar I had to display leftover conversation hearts and wrapped it with twine and a party circle (click here for your free download). If you don’t have a large jar, I bought this one at Wal-Mart for $4 in the kitchen section for another party and was able to reuse it here. A large Mason jar or spaghetti sauce jar would also work well. Or if conversation hearts make you gag, use another candy or ditch it entirely. I just wanted something large to help anchor side of the table. 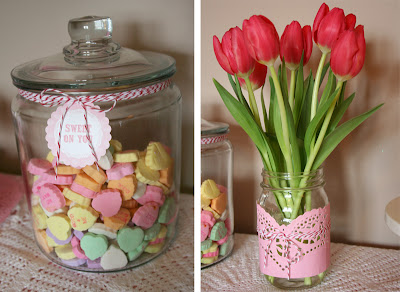 My tulips were displayed in a large Mason jar wrapped in a trimmed heart doily (I used the top half) and wrapped with twine.

One of my favorite details was the doily covered glasses. I took a mason jar, covered it with a doily cut in half, wrapped some twine around it four times and then tied a bow. Straws are $1.76 at Wal-Mart, and the pack I found had several shades of pink in it. I would have used those straws, but my five and three year olds found them and turned them into an art project. Thankfully I had some paper straws leftover from another project and could use those. You can buy a pack of straws like these from Shop Sweet Lulu for $3.50. 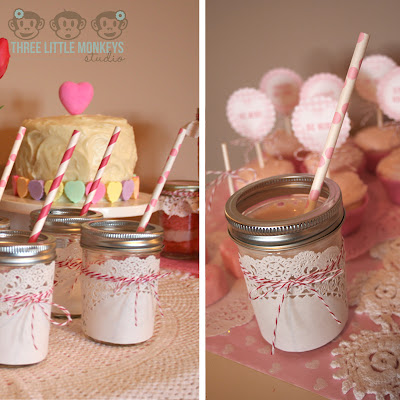 So, that wraps up my budget Valentine’s day party. Just $35 !

Welcome to Three Little Monkeys Studio, where I love to share creative tutorials and inspiration to help you celebrate all of life's big moments the DIY way!
ABOUT  |  CONTACT  |  WORK WITH ME  |  DISCLOSURE